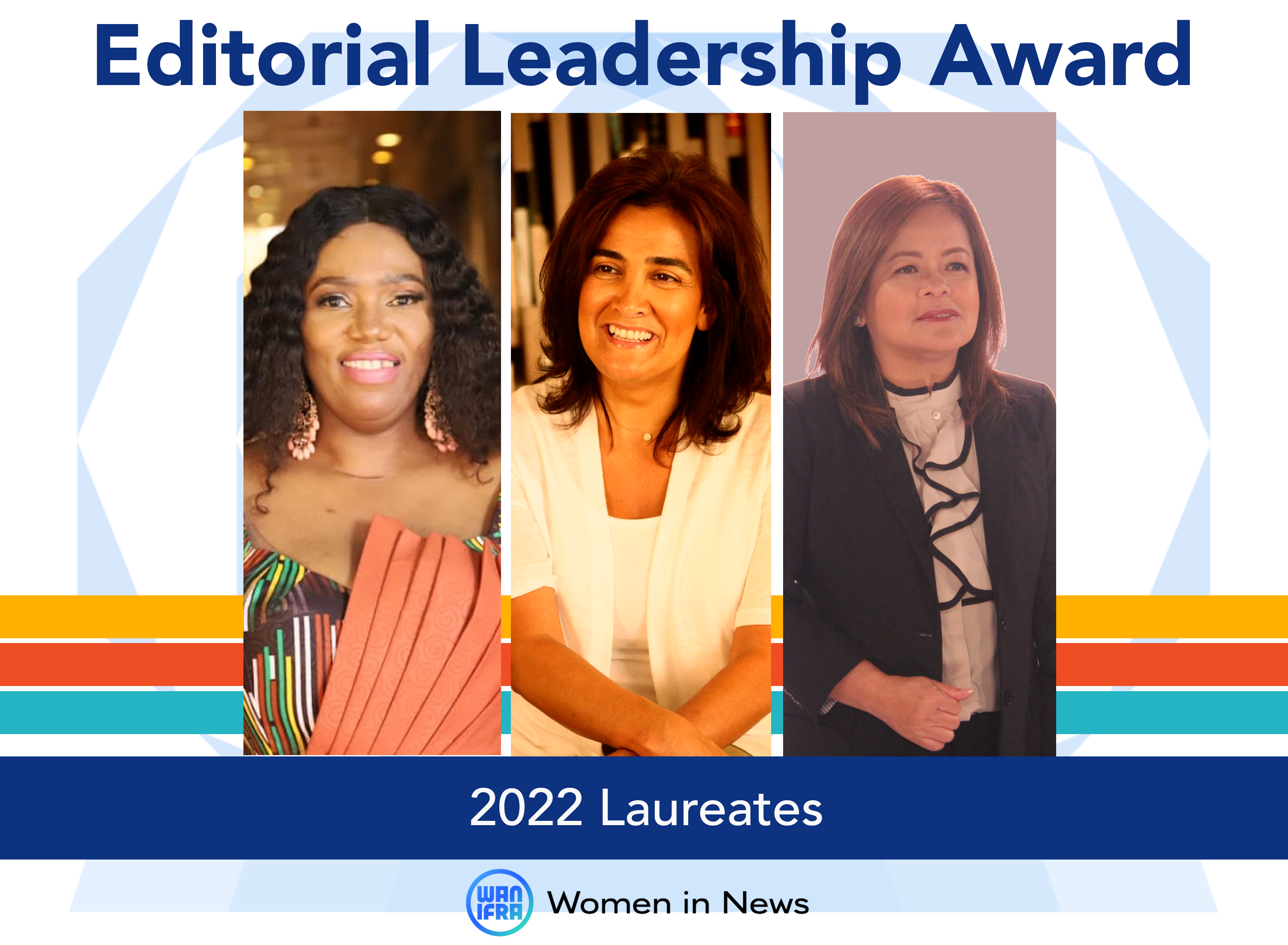 WAN-IFRA Women in News (WIN)  is proud to announce the recipients of its 2022 Editorial Leadership Award.

The annual WIN Editorial Leadership Award recognises the exemplary contribution of an editor to her newsroom, and under her leadership, her media organisation’s contribution to society. 2022 Laureates were honoured at WAN-IFRA’s World News Media Congress taking place from 28-30 September in Zaragoza, Spain.

In his congratulatory message, WAN-IFRA’s CEO Vincent  Peyregne said: “Equality and inclusion in the media are essential for a healthy and representative society. We are happy to welcome our 2022 laureates, Zaba, Moukalled and Reyes to the group of media leaders who play an exceptional role in making a difference in media while contributing to these fundamental ideals.”

Faith Zaba, who is the first woman editor of the Zimbabwe Independent, the country’s leading business and investigative weekly, owned by Alpha Media Holdings (AMH), has more than 27 years of experience in the news industry. She was also the first woman to be appointed deputy editor in 2016, and the first of many other appointments after this point until being named top editor in Zimbabwe independent.

“This award is a message to young women in the media and those who have the beautiful dream of joining this amazing profession; they too can sit at the table. Through sheer hard work, perseverance and determination, glass ceilings can be shattered. My message to the young women journalists is to never give up. You are worthy and, yes, you can. I am deeply humbled and honoured to receive this prestigious global recognition,” said Zaba.

Diana Moukalled is the co-founder of Daraj.com, an independent media platform addressing controversial issues in the Arab Region. She is a Lebanese journalist and documentary producer and director with almost 30 years of experience in the media industry. She has covered hot zones in Lebanon, Afghanistan, Iraq, Yemen and other conflict zones, and has shot more than 50 hours of documentaries, tackling socio-political issues in the Arab region and globally. Diana is also a columnist and a media and gender trainer.

“I am deeply touched by this award. It’s an acknowledgment that goes beyond individuals to highlight the challenges journalists in general and women journalists in particular face. The current political, economic and security conditions in the Arab region may lead only to more discontent and frustration. The situation simply doesn’t encourage optimism. It is, however, a road worth taking, with genuine commitment, patience, and enthusiasm,” said Moukalled.

Regina “Ging” Reyes,  a seasoned news executive with more than 30 years’ experience as a journalist, is currently the Senior Vice President and Head of Integrated News and Current Affairs Division of ABS-CBN Corporation, one of the Philippines’ leading media and entertainment companies. A premier news personality in the Filipino-American community, Reyes established and expanded ABS-CBN’s News operations in the US and Canada.

“This honour comes at a time when our news organisation continues to be severely challenged on many fronts.  I am deeply moved and humbled to receive this recognition on behalf of my entire news team, most especially the women in our newsroom and in the field. They are at the forefront of our battle to defend media freedom in our country and preserve the values of our profession,” said Reyes.

The Laureates are selected by members of the Women in News Global Steering Committee based on criteria such as commitment to editorial excellence, gender equality and supporting the next generation of media leaders.

To learn more about past Laureates: https://womeninnews.org/laureates/

2022 in Zaragoza, Spain is organised by WAN-IFRA – the World Association of News Publishers, in collaboration with the Henneo publishing group, the Government of Aragón, and Zaragoza Turismo. WNMC is the leading annual event for media leaders, bringing together 1,000 editors and media executives to discuss challenges and opportunities for the global news media industry. Over three days, the programme includes forums such as the World Media Leaders Summit, the World Editors Forum, the Women in News Summit, and the Golden Pen of Freedom award.

WAN-IFRA is the global organisation of the world’s press, comprising 3,000 news publishers and technology companies and 60 national publishers’ associations representing 18,000 publications in 120 countries. With a mission to protect the rights of journalists and publishers around the world to operate independent media, WAN-IFRA provides its members with expertise and services to innovate and prosper in a digital world and perform their crucial role in society.