Professional safety: a joint responsibility between journalists and media organisations 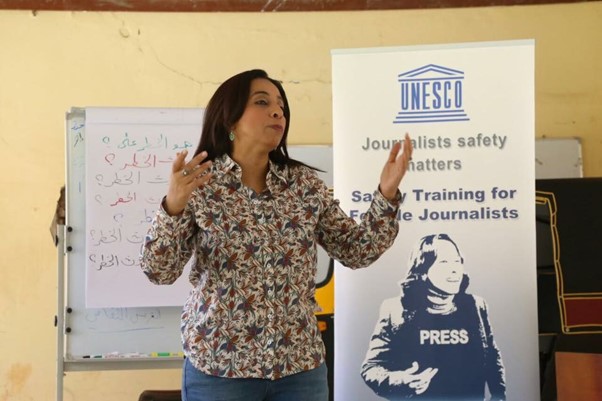 In this interview, we talk to Abeer Saady – researcher, media consultant, and trainer on safety, security and covering conflicts – about challenges that face journalists and guidelines for journalists to maintain their physical and digital security as well as their mental wellbeing while covering stories.

Abeer Saady is a journalist, researcher, media consultant, and trainer specialized in safety, security and covering conflicts for more than 20 years. She was elected as member of the Egyptian Journalists’ Syndicate three times. She was also the vice president of the International Federation of Women Journalists between 2015 and 2020.

What are the major challenges facing journalists working in areas of war and conflict?

There are a lot of challenges faced by journalists in conflict areas. In today’s world, different regions have different levels of danger that also varies depending on journalists’ work. For example, investigative journalists may not be covering stories in areas of conflict but would be working with controversial materials. Journalists don’t only face censorship, but they sometimes risk their lives as well. This danger is bigger for local journalists living within their communities and with their families who may also face pressure and risk their safety. Hence, the first and most obvious challenge for a journalist is to maintain their physical safety, as well as challenges to safeguard their mental health and digital security.

What are the guidelines that journalists can follow to ensure their safety in conflict zones?

They should be aware about the importance of safety and security that includes physical, digital, mental and social safety. Today, with the spread of the Covid-19 virus, physical safety is of great concern, especially for journalists covering the pandemic. Journalism, by nature, requires a direct contact with people. Journalists should be aware of the importance of mental and social safety, especially with the anxiety that comes with the risk of contracting the virus and transmitting it to their family. Also, it is essential for journalists to understand the risks of using communication technologies such as being vulnerable to digital viruses.

A journalist’s safety is not the responsibility of the journalist alone. Although journalists should take the initiative to attend security trainings, but media organisations play a major role in identifying the danger, finding safety and security experts to deliver training, providing life insurance, and equipping journalists with personal safety tools like bulletproof vests. The organisation is also responsible for not assigning journalists to cover areas where the risk exceeds a certain level. In addition, organisations can play an important role alongside syndicates by pushing for laws and legislations that protect journalists both locally and internationally.

Do women journalists in the Arab region face different threats even if they were not covering conflict areas? What are these threats?

Some people say men and women journalists are equally at risk. It is true that women face the same challenges as their men counterparts, but in fact, women journalists face additional threats. In addition to the risks that any journalist can face, women are subject to gender-based violence, for example, online harassment that can lead to assassinations, and this is what happened with many investigative women journalists in Mexico, in Malta and India.

How can they be supported?

For five years, over three rounds, I was the vice president of the International Federation of Women Journalists, which has members in 60 countries, and I personally opened offices for the federation in Iraq and Afghanistan. The attacks on women journalists are gradually increasing, especially with the rise of online attacks and harassment. Women journalists face harassment from sources, managers and colleagues. For it to be solved, this problem requires clear and specific legislations and administrative procedures to protect women journalists, and particularly those who have many professional achievements and are working on dangerous topics. The protection of journalists is the protection of journalism itself.

What are the most important issues you tried to raise as vice president of the International Federation for Women Journalists?

I focused on maintaining the safety and security of women journalists, negotiating the best possible working conditions for them, and building their professional skills whether they were full-time journalists or freelancers. We also focused on community projects and citizen journalism. My colleagues and I worked on building two community radios in the Philippines after the hurricane that affected large parts of the island. We worked on the extension of the Festival of Cinema and Journalism for women journalists and directors in India, which spanned six years before moving to our branch in Nepal. We also launched a cinema festival in Africa where the first round was in South Africa, then Uganda. We worked on representing women issues at the United Nations and organized many workshops for citizen journalism in African and east Asian communities.

Do you think that the shrinking space for journalistic freedom can increase the risks media professionals can face?

This is partly related to access to information. We live at times where journalists are largely regarded as spreaders of fake news; the former president of the USA Donal Trump equated journalists with fake news. This has greatly damaged the reputation of the profession. It is true that a minority of journalists do not follow professional ethics, but this minority should not overshadow the vast majority who works ethically and with a high level of credibility which they are keen to protect. In addition to security risks, journalists are also facing financial issues, especially that many media organisations are shutting down, and this creates a great deal of financial and professional pressures that inevitably affect their mental health.

What are the safety procedures that journalists need to take while covering the Covid-19 pandemic?

As I said before, the safety of journalists in disaster areas, including pandemics like Covid-19, is a joint responsibility between journalists and their media organisations. During all the workshops I delivered in the Middle East, Southeast Asia and Africa, I stressed on the idea that this virus is invisible but has unfortunately affected countless journalists who contracted the virus, and some of them unfortunately passed away at a young age. Therefore, journalists’ top priority should be to take care if their own safety and security and never neglect their health to cover the news. I also encourage journalists to get vaccinated and ask their media organisations to provide a life insurance to them.