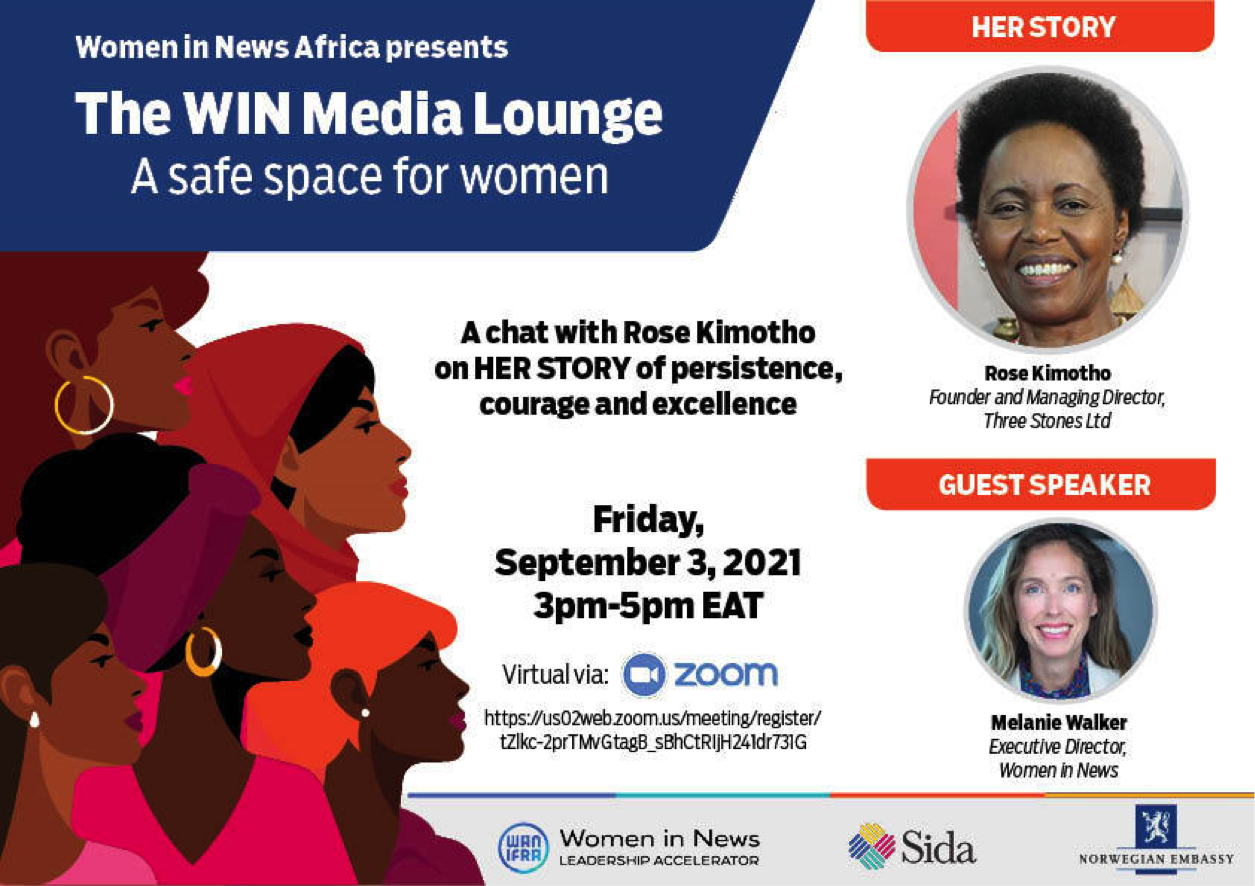 On 3 September, 2021 the World Association of News Publishers’ (WAN-IFRA) Women in News programme will launch a mentorship initiative for women journalists based in Africa.

The Women in News (WIN) Media Lounge will connect young, upcoming women journalists with their more experienced colleagues through storytelling sessions where intergenerational learning will take place in a safe space.

The virtual ‘fireplace setting’ will enable the sharing of personal experiences and practical lessons in life and journalism, such as managing careers, surviving the newsroom and taking care of one’s mental health.

“The inspiration behind the Media Lounge is that it is a support system. We don’t want women walking alone. We want women journalists to know that there is someone by their side, someone watching their back and someone ahead of them,” said Jane Godia, Director Africa Region, Women in News programme.

Research has shown that women’s representation in media across the world remains low. A recent study commissioned by the Bill & Melinda Gates Foundation titled The Missing Perspectives of Women in News found that while women make up half the population, they comprise only 39 per cent of journalists and just 26 per cent of journalism leadership globally.

This has a direct impact on the stories that are told and how women are portrayed in the media.

“We know that women in this industry experience a more hostile workplace than men,” continues Godia, “and often face hurdles that prevent them from reaching top leadership roles. The WIN Media Lounge will provide opportunities for one-on-one mentorship, with the objective of supporting young journalists to stay in the field of journalism.”

Barbara Kaija, the Editor-in-Chief at Vision Group in Uganda and a member of the WIN Global Steering Committee: added: “It is possible to spend two or even three decades chasing stories with very little development in your career. The WIN Media Lounge offers a safe place for sisters in journalism to talk about the challenges of the profession and also to share successes.”

Men and women bring different perspectives to news, and underrepresentation of one gender leads to an imbalance in media coverage. Findings recently released by the Global Media Monitoring Project, which WIN supports, show that women journalists are more likely to have women as subjects and sources, as well as cover a wider variety of major news topics.

“We want to see change as a result of the WIN Media Lounge. We want to see women who will stay on and jump over hurdles that are in their career paths with ease. We want to see impact, where women do not give up but build resilience, knowing that no matter what, journalism is the only choice they have and they will not leave,” said Godia.

A key segment of the initiative will be ‘Her Story’, where the yet-to-be documented career stories of women in journalism will be told through panel discussions and interviews, and serve to inspire others.