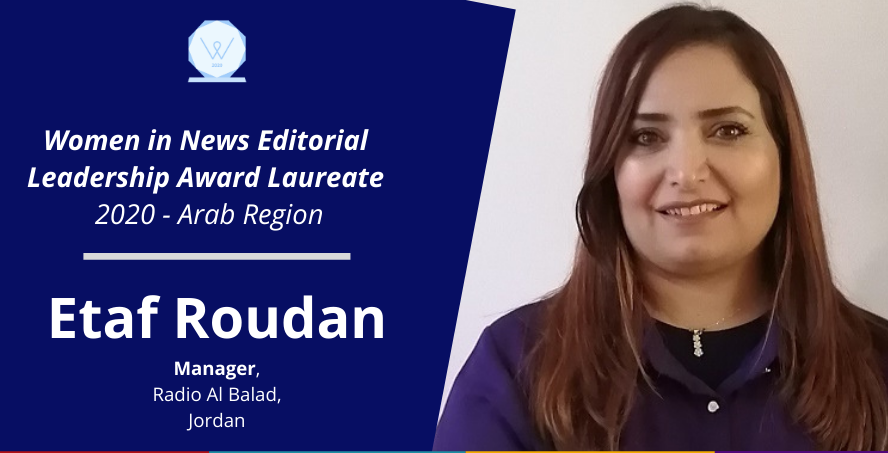 Jordanian journalist and editor Etaf Roudan has dedicated her career to empowering women in the media, and championing equality and press freedom. She is this year’s Arab Region Laureate of the WAN-IFRA Women in News Editorial Leadership Award.

The WAN-IFRA Women in News Editorial Leadership Award celebrates women in the media who have shown leadership skills, editorial integrity, a commitment to press freedom and gender equality, and made an impact on society. This year’s Laureate for the Arab Region, Etaf Roudan, has demonstrated such commitment in and out of the newsroom.

Roudan has built her media career on highlighting the most important issues facing Jordanians, especially women and marginalised communities. After studying law, she has spent the past 15 years working as a journalist, radio broadcaster and editor across multiple platforms.

As a founding member and director of Radio Al Balad, an online community radio station launched in 2002/2003 in Amman, Roudan has continually used the platform to address the country’s most pressing topics. Her radio programme focuses specifically on the intersection between society, politics and women. The radio station has also been a leader in stamping out sexual harassment in the workplace by creating a clear, institution-wide policy.

In June of 2020, a USAID Jordanian media assessment lauded Radio Al Balad and Roudan for their gender policies and focus on women’s rights. Roudan – who is the first Jordanian woman to head a community radio station, says Radio Al Balad has had an important effect on Jordanian life.

“This proves that impact doesn’t come from big organisations and budgets, but it comes from passion and love and commitment of the work team,” she says. “Believing in the goals and values we set, especially values of equality, freedom and equity, becomes a style of life, not only a job.”

Roudan’s focus on women and gender equality led her to head the “Empowering Zarqa’s Women using Media” programme between 2012 and 2016, which focused on empowering women from Jordan’s Al Zarqa region to become more involved in the decision-making process through media and journalism training. The three-year long programme, funded by the European Union, trained a total of 75 women.

In addition, Roudan was a founding member of the “Your Voice… Your Identity” project that began in 2018 and will continue into next year, providing media training to women in Jordan. The project works on building confidence, media literacy and encouraging women to broaden their reporting out to a wider range of topics, including issues affecting women and those in marginalised communities.

The content created by participants is broadcasted weekly on Radio Al-Balad and Amman.net.

“I am proud of this project because it translates my vision of training women in different corners of the kingdom,” says Roudan, “[such as] work with rural areas that are not usually targeted in women-related and equality-related projects.”

Roudan’s focus on training women in the media and empowering them to be successful in the field has been an important driver in her career, and a major reason why she has been chosen as this year’s WAN-IFRA WIN Editorial Leadership Award Laureate for the Arab Region.

“In Jordan, there is a big gap between men and women who work in the media. We need more quantitative gender balance, because numbers have a big impact on content,” says Roudan. “The more there are women in the media, the more we have a public opinion that supports women issues in many fields, including political and social participation of women and freedoms.”