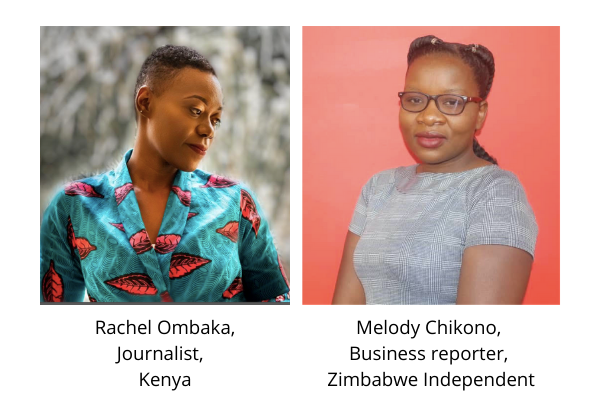 Sexual harassment is a scourge in our societies and it is no different in the media. Women in News is working with executives, editors and women journalists to put policies in place that call out inappropriate behaviour within the workplace. But harassment still goes on. Here two WINner’s share their experiences.

Rachel Ombaka, is a journalist from Kenya and a 2019 WINner. Her trouble started when she started a new job after giving birth. Fortunately for her, the new organisation was supportive. She was brave enough to share her story.

“I had just come from maternity leave, and had to wear nursing pads to avoid milk leaking to my blouse.  Very few of my office dresses fitted, so I wore the only dress that would work for my first day back. I was excited because it was a new job and I had been jobless for two years.
My new employer had taken a chance on a pregnant woman and waited for me to give birth before I joined the team. I was over the moon.
My excitement was short-lived. I discovered that I was fresh meat for some of the men in the newsroom. Because of my added weight, my only-fitting dress was shorter than usual so when I sat down for the morning meeting it rode up my knees. I kept tugging at it albeit unconsciously but also nervous because I wanted to make a good first impression.
As I was listening to my new colleagues giving ideas on which stories of the day to cover, a message arrived on WhatsApp from one of my new bosses.
“You have very beautiful legs!” the message said. I was immediately upset, confused, and unexpectedly angry. Why would a boss send me such a message? And in the middle of a meeting? I was livid!
“I don’t appreciate such messages. Kindly let’s keep our communication professional!” I replied. There was no response and this made me even angrier.
At the end of the meeting I went straight to the HR Director’s office. She is the one who had taken a chance on me, employing a pregnant woman. I knew I could trust her. I explained what had happened. She was also upset and asked to see the message. She told me my response was good as I had made it clear that I do not entertain messages that border on sexual harassment.
One important thing she told me was to take a screenshot of the message and send it to my email. Keeping records of such messages, is the first step towards building a case. She advised me to send another message telling him that I respect him as a boss and this false start should not affect our working relationship. She said perpetrators can sometimes use such incidences to frustrate someone in the workplace by not assigning them tasks or always looking for mistakes in their work. She advised that I should ensure my work was excellent so that he had nothing to use against me. I left her office knowing she had my back.
By the time I got back to my desk the boss had replied: “I am very sorry. I didn’t mean to offend you. I also respect you and will not repeat this mistake.”
Since that incident, I discovered that there were a lot of sexual harassment incidents, not just at our workplace, but in the media industry as a whole.
What makes it worse is that women feel ashamed or even guilty, so will keep silent or stop coming to work altogether. Some cases even involved interns being tricked into giving into sexual favors in the guise that they would be employed when they finished their internship.
I was tasked to step in and speak up on their behalf against the perpetrators. I continue to do so even today.
Something else that I learned is that getting a male figure of authority in the newsroom was even more powerful as men are conditioned to respect and subtly even fear repercussions of going against such figures. So I approached one of the top male directors and intimated to him about the rampant cases of harassment in the newsroom. He was appalled and said it was unacceptable for a reputable organization to have such a reputation, and more so for women to fear speaking up or working alongside male colleagues because of sexual harassment. During our  monthly meeting, he raised the issue and was candid that the organization would not treat kindly anyone harassing the other in the workplace. The new girl brought change! I am proud to be a woman that other women can count on to have their back.”

For 2020 WINner, Melody Chikono, a business reporter at Zimbabwe’s Independent, the introduction to newsrooms taught her a valuable lesson.
“It taught me to be bold, and I vowed never to be a victim again. It is 10 years on, and even when I have moved newsrooms, I have never allowed myself to be a victim.”

“In 2010 I was an intern at a reputable paper. As a culture, the boys in the newsroom, including the bosses, would choose girls from the new crew. We were chosen but did not know. As days progressed, all my mates had boyfriends in the newsroom except me.
When the word finally arrived from the desk editor, I turned him down, not knowing I was digging my own grave. The more he pursued me, the more I turned him down. At that time, an intern would not go home without their work being cleared by their superiors. Unknowingly, I spent two months leaving the newsroom around 8 pm when the paper was full, but my stories were never looked at.
They named me Holy Mary, it continued until a senior guy told me what was happening, and that I was paying for turning down the desk editor.
One day our driver then told me that all the senior guys in the newsroom were planning something big that would eventually send me home without finishing my internship. That is when I made a bold move to report the desk editor. He was called in for questioning and issued with a final warning letter. Looks like he had been doing that for a while.
Life became hectic. He started ignoring and sidelining me on assignments until a female editor transferred me to her department.
This experience taught me to be bold, and I vowed never to be a victim again. It is 10 years on, and even when I have moved newsrooms, I have never allowed myself to be a victim.”