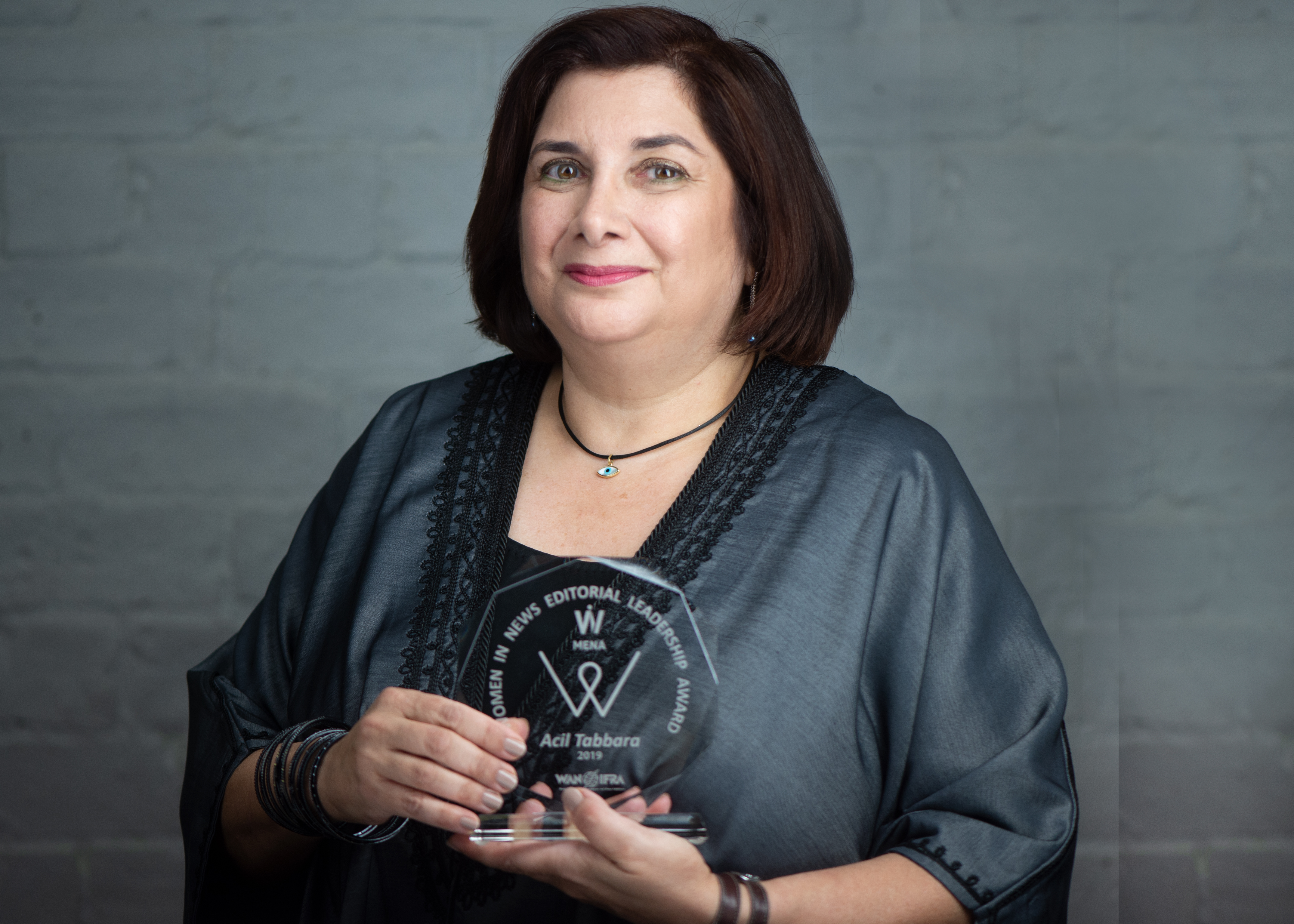 Acil Tabbara is a veteran Lebanese journalist, and the 2019 WIN Editorial Leadership Award MENA Laureate. Her journey as a woman journalist reporting from some of the toughest moments in histroy is an inspiring tale. We sat down with Acil to ask her about her passion for journalism, what she thinks are the challenges facing our industry, and what advice would she give young women just getting started.

How did you start your career as a journalist?

At first, I never expected working in the media industry, but politics was my all times passion. When I was 12, the war started in Lebanon and this affected my political awareness, and at this age I started listening to the radio and reading newspapers. I realized that politics was my interest, and I wanted to understand what is happening in the world. As teenagers, unlike grown-ups, the war in Lebanon was an adventure to us. Sometimes, we used to sneak out of the house to go attend political events and reunions, and this was revolutionary for us. We lived this history of Lebanon.

I started studying economics and then switched to studying political science. At university, when I was a masters candidate, I started working at L’Orient Le Jour for a year before moving to AFP in 1996. At the time, young Lebanese people were being recruited by international agencies because foreign journalists didn’t accept to come to Lebanon. We learned the job in a very difficult way. We had the responsibility of telling people what is happening. By the end of the war, I was certain that being a journalist is what I wanted. This is how I became a journalist.

What are the challenges that you faced as a journalist?

The challenges are for a journalist to remain independent and not be influenced by the propaganda. The propaganda tries to change the journalist’s opinion. Also, journalists shouldn’t be scared, but at the same time, they have to create a balance to avoid putting their life at risk. Furthermore, media organizations should support their journalists, and prepare them to the risks they might face.

In your opinion, what are the challenges that the media industry is facing today?

Financial problems are the main issue the media industry is facing now. In our region, political regimes used to fund media organizations. Today, the independent journalism is not able to survive. Also, a lot of journalists work for these regimes and this is negatively affecting the industry. Being a journalist is a job of constant difficulties, and journalists should know this and not take the easy way out. We need to find an alternative were people are ready to pay to receive the news. We have to reinvent the industry.

Another problem is fake news. Journalists should work to fight fake news we receive daily on social media. And the worst is, fake news are not the only issue, but the algorithm of Facebook, for example, that gives us the news that ally with our way of thinking and this is dangerous because it is  slowly killing public opinion and the counter-argument we might have. Also, the rise of citizen journalists made people feel they don’t need journalists anymore. Only in times of crisis, they realize the need for trusted news agencies and trusted journalists.

What are the challenges that are specifically faced by women in the media industry?

Being from an older generation of journalists, we had to pay the price of compromising our security and privacy to be journalists. When I had children, I was never able to report from conflict zones anymore. Contrarily, a lot of my women colleagues who decided to develop their careers were not able to get married and have a family. Men never had to live this dilemma. It is true that men are now more supportive than before, but it is still not easy. During holidays and weekends, my children could never have plans like their classmates because I used to work most of the time.

What is the importance of gender balance in media organizations?

The importance of gender balance in the media industry is that women are sometimes able to get more sensitive content about marginalized communities. As women, we have the sensitivity to be the voice of the voiceless and we can do more stories that are based on what people feel and from what they suffer. Because of the women I’ve worked with, I feel that women are less oriented towards having their bylines and are more focused on the outcomes of the stories.

As we see today, there are more women journalists, and this is maybe because the job is becoming more precarious. Before, being a journalist was a prestigious job, and insured a good income. Today, a lot of women are becoming journalists, and it is important to think whether it being a low-paid job had an impact on that. Also, being a journalist is not as prestigious as it was before, so women are more able to find themselves in the industry. Women are humbler and want to search for the truth. Also, they have a tendency to question themselves. They always want to become better. They are serious and very hard working, especially women who have children, they are very organized and can multitask, and this is something they might have learned when they became mothers.

What advice would you give to young women who want to become journalists?

I would advise them to find a niche, or anything that could help them find a sustainable income. Journalism is a very difficult industry, especially today. They should avoid being general news journalists and work to be more specialized. General news is very difficult now. We must reinvent the industry.

I also advise them to have a digital media literacy and use the modern means, like videos and podcasts. Everything is changing and they should follow the trend. We should stop romanticizing journalism as a job. Always think who is reading, their age, and the new generation. Podcasts can be a new way of telling the story. We need a new way of thinking. We have a story to tell, and we need to tell it right, no matter what were the means we use or platforms we use.

The last advice I would give is to be very careful. Being a journalist became more and more precarious, especially that young journalists, with their strong drive, usually go to very dangerous places without being trained on how to protect themselves, and sometimes they go as as freelancers, not being supported by any media organization, and they usually face kidnappings and killings because they are not trained. This is a very dangerous thing that is happening to the youth in the media industry. Journalists shouldn’t put themselves at so many risks without being trained and having the needed guarantees and support.