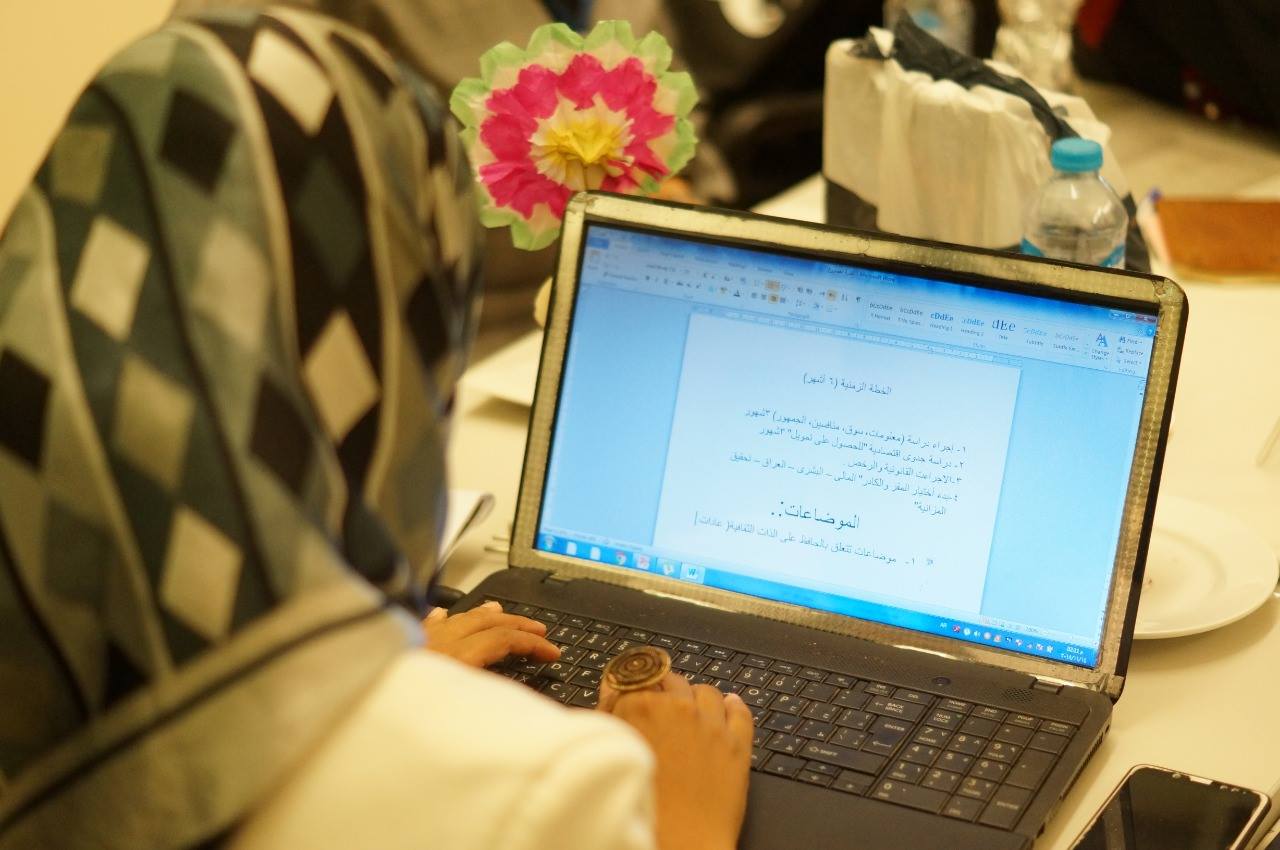 A child appears on the screen’s background during a morning meeting; another child screams calling his mother during an important phone call; serious concerns around dismissal and reduction of salaries. Women journalists have been trying to cope with increased pressure after the lock-down that has been imposed on them due to COVID-19 pandemic, and made them struggle with a dual pressure: challenges of the virtual newsroom, and challenges at home. The decision that allowed them to stay at home has definitely put them at ease, and helped them protect themselves and their families from the virus, but increased the challenges they usually face: working from home is not as easy as they imagined it to be.

Dina describes life after COVID-19 as “messed up” where everything is chaotic and overlapping: work schedule, cooking, house chores, taking care of children. “However, I tried to organize my daily schedule by setting specific times for cooking, cleaning and eating,” she says.

When COVID-19 started to spread in Egypt, around mid-March 2020, the Egyptian government took the decision to close schools and nurseries. Consequently, Youm 7 newspaper decided to allow women journalists who have children to work from home. This decision was followed by a national decision taken by the National Press Authority that gives women journalists who have children a leave until schools open again and decreasing the number of journalists in newsrooms. Many media organizations in Egypt abided by this decision.

Dina and her colleagues are experiencing a new way to work since they started working from home. All meetings are taking place virtually online; following a preset schedule, one journalist per day only from each department is physically present in the newsroom to coordinate with the rest of the team; the newspaper’s workspace shouldn’t contain more than 30 employees per day, compared to more than 200 employees before COVID-19 preventive measures.

While other national institutions like Al-Ahram allowed women journalists to work from home and informally indulged in applying the rules of attendance, according to a number of women journalists who work for Al-Ahram, this has raised their concerns that this might be used against them in the future. “The administration is not applying strict attendance rules. However, since my children are not very young, the option of working from home doesn’t apply to me, and I have to go to work every day,” said a woman journalist who preferred to remain anonymous. “Working in times of COVID-19 added many professional burdens. We are required to produce stories from scratch and face difficult conditions at work and the fear of contracting the virus. Moreover, the indulgence of the newspaper’s administration makes us fear for our future. Everyone knows the crisis that national newspapers are currently facing, and we fear that we, women journalists, will be the first to be let go to alleviate the financial burden on national institutions.”

The situation at Al-Ahram Hebdo, a French publication of Al-Ahram, is different. Women journalists can’t be on leave during COVID-19 because they constitute the majority of the newspaper’s employees. Nessma Reda, assistant editor in chief of Al-Ahram Hebdo, said that “women constitute 90% of the newspaper’s employees. Therefore, we didn’t benefit from the decision that allowed women journalists and people living with chronic diseases to stay at home.” However, Nassma and her colleagues managed to create a schedule that allows them to work from home most of the time, despite the technical challenges they might face. “Sometimes, we discover mistakes after publishing dur to weak communication with the graphic designers and final editors. Working from home has also took from us the motivation we get when we report from the field,” she said.

One of the biggest challenges facing women journalists during this time is the lack of ability to report from the field and follow-up with their sources, which increases their concerns that their career will be affected by this period if it didn’t end soon.

"The productivity of women journalists has decreased with Coronavirus and working from home, especially regarding the new stories,” said Jum’a Hamadallah, head of the news section at Al-Masry Al-Youm newspaper. “Most of what they report on now is official press releases and some phone follow-up." A manager at one of the Arab Newspapers in Cairo who preferred not to reveal his name disagrees with what Hamadallah stated. His newspaper forced all employees, men and women, to work from home. “The performance of women journalists increased when they started working from home, unlike men journalists whose work was negatively affected by the month of Ramadan," he told WIN.

Investigative journalists are passionate about fieldwork. Therefore, Coronavirus had a negative impact on Marwa Yassin, deputy head of the investigations department at Al-Watan newspaper, who said: “Working from home over the phone makes me lose the ability to describe people's feelings and expressions. I miss fieldwork, but at the same time I can’t go out to protect my children.”

Wafaa Yahya, who reports on education news for the Al-Masry Al-Youm newspaper, wishes she could resume working from the field. “Granting women journalists a leave during the epidemic is a good thing, but it definitely limits their professional development", she said. However, she believes that "working from home has some advantages, as it gives her the opportunity to spend more time with her children, it reduces her movement and the use of public transportation that increases the risk of contracting the virus,” noting that she has transferred the monthly transportation budget to increase phone and home internet packages to be able to do her job.

Working from home has a psychological impact on women journalists who are feeling that they were required to do everything at the same time. Young children do not understand the meaning of work schedules, which sometimes put them in embarrassing situations during virtual work meetings; both men and women journalists are exposed to similar situations while working from home.

Dina told WIN that “her two sons, Ward, six years, and Wasfi, two years, attend with her all the online meetings. Her eldest son always wants to see his father - who works at the same newspaper and often attends the meetings of the editorial board - and is always keen to wave to his father and ask him questions." One day, Dina had to ask one of her colleagues to write the end-of-day report on her behalf because she was carrying her young son and she could not write. She called her colleague and dictated the report to him over the phone.

As for Marwa, she said that "her work at home with her 4-7 year-old children is not easy. Their fights become louder when I am speaking on the phone with the sources which sometimes embarrasses her." Some people may think that the Corona virus has not changed the nature of freelance journalists’ work, but this is not true. Mona Abu Al-Nasr, a freelance journalist, says that she worked freely from home for about three years, but it is different in times of COVID-19. “Previously, I used the time when my children were at school to finish my work, go out to meet sources and attend events. Now, my children are with me all day long, there are no activities or events to attend, and my work is restricted to phone calls only."

This affected the pace of work. Instead of completing a press report in two hours as before, Mona currently needs hours, and sometimes days, to write the report. "I sometimes have to stay up late to write a story. I must write; my income depends on the stories I write, and the lack of production means less income," she said.

"Today, taking care of my 5-year-old and 8-year-old sons is consuming a lot of my time, which affected my income, and most importantly, my state of mind. I am no longer able to create ideas like before; there are no events happening to inspire me, it is difficult to come up with stories that are not related to COVID-19, and the pressure of producing good quality stories is higher. As a freelance journalist, there is a certain level of quality that I must maintain, otherwise my story will not be published, and I may lose the interest of the newspapers I work with,” Mona told WIN.